Constraints encourage creativity. Forcing yourself to tell a story in eight words or less requires shaving away all the excess, leaving just the central kernel.

Why eight? Eight is enough words to allow for things like world building and context, but not so many that that’s easy. In short, eight words allows forays into genre fiction (sci-fi, fantasy, horror etc) that a shorter word count would make near impossible. At the same time it’s kind of arbitrary and the above could just be rationalizing the founder’s choices.

Why not six? Some think six words are the optimal challenge to them I say, “get down with yo bad self” (hey, see what I did there?) ok, I’ll stop. (Those aren’t stories). But hey, if you’re a six word purist, we publish stories up to eight words so go ahead use the hashtag #TwoWordsBetter and show us how much more awesome you are. (At least until the five word purists show you up.)

All stories published on 8wordstories.com are copyrighted by their authors, but are licensed under a Creative Commons Attribution Non-commercial license allowing you to basically republish stories elsewhere as long as you’re attributing them and not making money off them. If there’s a question please contact the author to get their permission.

We are interested in empowering authors as much as possible so you will retain the copyright to your work. We also believe in empowering readers and we feel that the CC non-commercial license provides the best marriage between access for readers and control for authors. As an author you’re agreeing that in exchange for access to the publishing platform your content will be published on 8wordstories.com with a CC Attribution Non-commercial license and you’re also giving 8wordstories.com the non-exclusive, perpetual right to publish anthologies and other formats of the stories (with attribution). This helps 8wordstories.com keep the lights on. 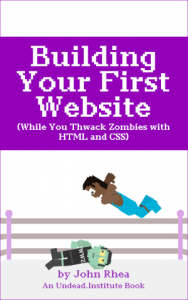 Build your first website (while thoroughly thwacking zombies.)
Thwack Away!